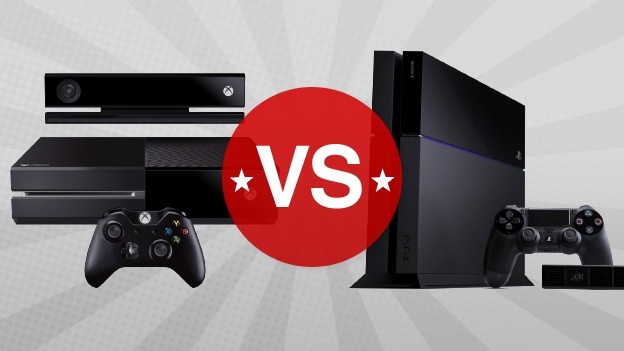 The Xbox One vs. the PlayStation 4 – which one comes out on top?

Many titles can be given to 2013. 2013 was the year that included the death of the revered and inspirational Nelson Mandela, the rise of Miley Cyrus and the release of some brilliant blockbusters (this is the year that gave us Man of Steel, Iron Man 3 AND Thor 2: The Dark World- I don’t even need to say anymore).

But 2013 can also be titled ‘the year of gaming’, as it’s the year that gamers worldwide have been waiting for. Last month saw the release of both the Xbox One and the PlayStation 4, and as expected, both sold out within a couple of days, with many people left disappointed that they didn’t secure one of the consoles in time for Christmas. (That’s what ‘pre-ordering’ is for by the way. Just saying.)

So I’ve given it a month, done some extensive research (Google, online reviews and asked on Twitter) and come up with this, to try and help you decide which one comes out on top. Both have their die-hard fans – you will most definitely know people that will give you a straightforward answer immediately, purely because they have an attachment to Microsoft over Sony, or vice versa. But which one is actually better? And it seems, (I should have known), that it comes down to the age-old answer of, “it depends what you’re looking for”.

Let’s take a look at the specs. Power wise, according to trustworthy online tech websites, the PS4 seems to win in this area. It’s more powerful, and despite using a similar AMD processor, the way in which the PS4 has been engineered means that it has much more processing power. Although more powerful, the PS4 is also significantly smaller and sleeker, meaning that it won’t take up too much room. Graphics wise though, the Xbox One seems to win, with Microsoft significantly improving on the already-very-clear picture quality from the Xbox One’s predecessor, the Xbox 360. However, the verdict on graphics on both consoles will vary from game to game, and so this isn’t a definitive opinion.

Sony has intentionally focused on the social aspect of gaming with the PS4, and I personally think the shared gameplay features on the PS4 (the new controller has a ‘share’ button on) is a smart move from them. When I asked on Twitter, 2 of my followers (@SamFloating, @KareemPBrown) noted that the PS4, despite them thinking that the Xbox One provides a better gaming experience, would be chosen by them purely because of the social aspect, something that I know a lot of gamers heavily consider when purchasing a console. That being said, there are many gamers that would easily value the gaming experience over social interaction, and so their decision may vary.

The Xbox One offers more apps than the PS4. The Xbox One also has more exclusive games associated with its release, including Halo 5 and Dead Rising 3. But when these lists are scrutinised thoroughly (and they have been – I’ve checked), they seem to bring the PS4 back onto the same level, despite being seemingly behind initially. One of the Xbox’s best apps 9in my opinion), is Netflix. But the PS4 offers the free BBC iPlayer, something that many gamers value dearly. (Because when gamers aren’t shooting each other and hiring prostitutes on GTA, they’re catching up on Eastenders). The Xbox One’s offer of 4OD in comparison with iPlayer seems to pale slightly, if I’m honest. As for the games, yes, Halo 5 is an Xbox exclusive,

but one of the biggest selling games of the year so far, FIFA 14, is available on both, and THE biggest selling game of ALL time, GTA V, isn’t available yet on either console. This appears to bring both lists back onto the same level, although opinions may be divided over my stance on this.

To be honest with you, opinions have been divided over every aspect of both consoles. Despite the opinion I just stated, when I asked on Twitter, another follower (@Semss_98) said that, in fact, the Xbox wins because of its entertainment factor, but the PS4 provides a better gaming experience. Similarly, another follower (and friend, @SuperMidziee) said that he’d choose the PS4 because it focuses on gameplay, whereas the Xbox One is good, but is too concerned with multi-features (possibly referring to the idea that it offers more apps, etc).

So, like I said, it all seems to depend on what you’re looking for, and what you like. You want a great gaming experience with great graphics and great apps? Go for the Xbox One. You want to save roughly £100, get the much-valued social experience that has become synonymous with 21st century gaming, as well as a more powerful, sleeker console? Get the PS4.

Or you could just go for the 2012 released Nintendo Wii U which is also out, and you’d avoid all this fuss.