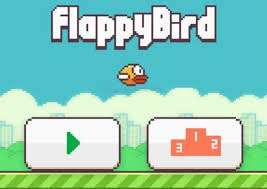 I’m sure everybody between the age 14-19 has played the game ‘Flappy Birds’ within the last 24 hours…that is one addictive game. The game which is avaialable on all touch screen phones, has become a sweeping craze throughout the app word even though the game was created last year, it has only recieved crazy recognition now.

After looking at our twitter timeline, it seems this game is an absolute menace

In most games your highscore is probably 1000 and over, but not with flappy bird…this game is different, this game frustrates you and tests your brain, but its some simple that it can actually make you break your phone, I almost did!

The aim of the game is to travel through small gaps inbetween pipes; all you have to do is tap the screen for your bird to stay up at the right level depending on where the gap is on the screen. I promised myself I wouldn’t download the game but I couldn’t resist. Since then its all I ever do, flappy birds on the train, on the couch and on the toilet

Find the game on any app store, for free! Enjoy and flap!!!