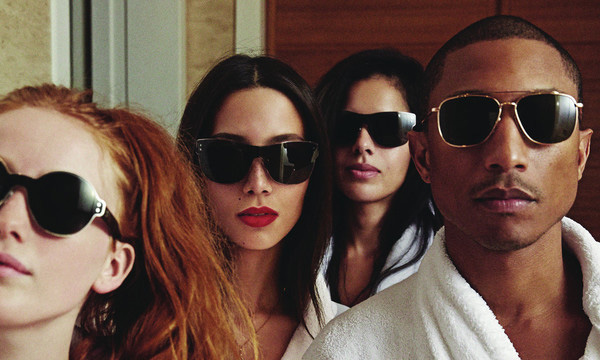 Pharrell is often described as the “coolest man on the planet” and it’s often hard to disagree. Producer, singer, songwriter and fashion producer, it wouldn’t be an exaggeration to say that the man seems to have it all.

‘G I R L’ is his first solo release since his debut solo album ‘In My Mind’ in 2006, and naturally, being the guy that he is, that had people excited. Scheduled for worldwide release on 3rd March 2014, it was inevitably leaked earlier this morning (26th February), and so I quickly downloaded it before all the links disappeared (I REALLY hate when that happens).

It’s Pharrell. Does he ever? His features on two of 2013′s biggest summer songs, ‘Blurred Lines’ and ‘Get Lucky’, made him an in-demand artist, and people were expecting big things from his latest solo offering in 8 years.

The album starts off with “Marilyn Monroe”, a track that begins with dramatic, cinematic strings before the beat drops. This instantly reminds us that Pharrell is undeniably one of the defining producers of our time. The production is fantastic throughout the entire album, and is particularly highlighted on “Marilyn Monroe”, as well “Come Get It Bae”, featuring Miley Cyrus, (despite your personal view towards her, it’s actually one of the standout tracks on the album in my opinion), whom Pharrell refers to as his “little sister”. (Little sister. Little sister. They are talking about sex in the song though. I mean. Its euphemisms, and playful euphemisms at that. But still. Little sister.  Moving on).

Tracks 3 and 4, ‘Hunter’ and ‘Gush’ are where Mr Pharrell Williams gets a little bit above PG on us. Overlooking the fact that it has the most explicit lyrics on the album (though Pharrell does a bloody good job of making it sound sweet and romantic, which I personally think is a talent), ‘Gush’ is a throwback to vintage N.E.R.D days, which is debatably where Pharrell made his best music.

Track 7, ‘Gust of Wind’ featuring Daft Punk is one of best tracks on the album, and the French robots have quite clearly worked their hand on the production here. It pays off. Brilliant track.  ‘Brand New’ with Justin Timberlake is a battle of the falsetto and the harmonies combined with the samba-style beat mean that song comes off sounding like it’s ready to be released as the next single, after the infectious ‘Happy’, which makes an appearance at Track 5.

On the whole, ‘G I R L’ is, excuse the pun/annoying reference to his hit single ‘Happy’, relentlessly happy. It’s positive and romantic and fun, and everything you expect from the Pharrell we know today. Immaculately produced, Pharrell celebrates his solo comeback with this daring, fresh album. At times, it’s busy, but all the tracks are immensely listenable, and as expected (and hoped for), Pharrell has done it.

Skip  - Happy (But not because it’s a bad song. In fact, it’s the opposite; I think it’s brilliant in its simplicity. But it’s on like, every single advert and you don’t even need to touch the album to hear the song)